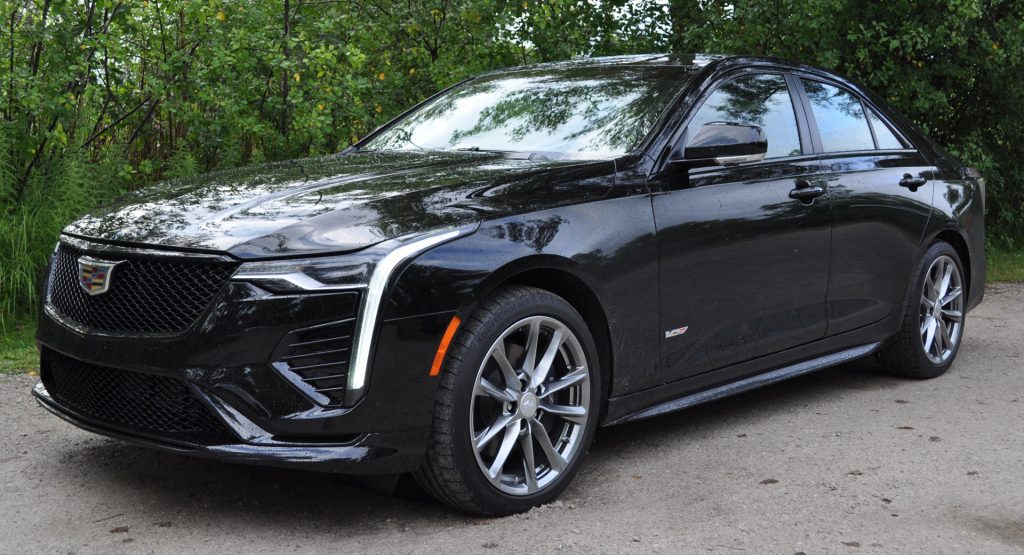 The crossover craze has killed a number of sedans, but the entry-level luxury segment has bucked the trend as there have been several new additions including the BMW 2-Series Gran Coupe and the Mercedes A-Class Sedan.

These two have gone on to spawn performance variants, namely the BMW M235i xDrive Gran Coupe and Mercedes-AMG A 35. Of course, the segment also includes the Audi S3 as well as the slightly sleeker Mercedes-AMG CLA 35.

To counter them, Cadillac has created the all-new CT4-V. While it’s not the V-Series of yesteryear, the company is following in the footsteps of the Germans by offering a more affordable performance variant while also working on a fully-fledged CT4-V Blackwing.

We recently spent a week with Cadillac’s sporty sedan and came away with mixed emotions.

Say what you will about the CT4-V, but it’s a looker, especially when compared to the M235i. As the largest and only rear-wheel drive sedan in the segment, the CT4-V features better proportions and a sporty DNA.

It follows in the footsteps of the ATS, but adopts Cadillac’s new design philosophy which was originally showcased on the Escala concept. As a result, it has a wide grille which is flanked by slender headlights and vertical daytime running lights. Designers also added a bulging hood, streamlined bodywork and a more expressive rear end.

Of course, the CT4-V takes things even further as it has been equipped with a sporty body kit that includes a more aggressive front fascia with a black mesh grille. Designers also installed sportier side skirts, a rear spoiler, unique taillights and a four-tailpipe sports exhaust system. Eighteen-inch alloy wheels are standard, and 19-inchers are available for an extra $2,350.

Of course, that isn’t surprising, as the ATS was originally conceived as a competitor to the BMW 3-Series and Mercedes C-Class. As a result, the CT4’s dimensions are more in keeping with those models.

Cadillac Outside, Chevy Inside

While the exterior looks pretty good, the interior is underwhelming. Black plastic is everywhere and the cabin is largely devoid of trim aside from some aluminum on the center console. This results in a dark cockpit that doesn’t feel very sporty or luxurious.

It’s not all bad, though, as most of the plastics are high quality and the CT4-V features a nice sport steering wheel with metal paddle shifters. The car also comes equipped with comfortable and supportive front seats which offer heating and ventilation.

Other highlights include an ambient lighting system, a 14-speaker Bose audio system and a wireless smartphone charger. The CT4-V also has good visibility and a quiet interior.

The center stack largely carries over from the CT5, but it’s topped by a smaller 8-inch touchscreen infotainment system. It’s fast and responsive, but small for its class as the M235i has a larger 8.8-inch display while the A 35 has a 10.25-inch infotainment system with a matching digital instrument cluster.

The CT4-V, on the other hand, has analog gauges. However, they can be augmented by an 8-inch driver information center which is included in the $1,150 technology package that also adds an air ionizer and a head up display.

Despite being larger than its competitors, the CT4-V isn’t exactly roomy. The front seats offer plenty of space, but rear seat passengers only have 33.4 inches (848 mm) of legroom. That’s less than the A 35 and M235i, and it means this 6’ 2” reviewer couldn’t sit in the second row without moving the front seat so far forward I could no longer sit up front.

Furthermore, the rear seat is firm and the angle of the backrest isn’t great. On the bright side, there is plenty of headroom in the second row. Speaking of space, the trunk holds 10.7 cubic feet (303 liters) of luggage, which beats the A 35 by 2.1 cubic feet (59 liters). However, the M235i’s trunk is significantly larger, as it offers 15.1 cubic feet (427 liters) of cargo room.

A Truck Engine In A Cadillac? Truck Yeah

Of course, Cadillac didn’t throw in a truck engine and call it a day. Instead, they equipped it with “Cadillac-specific content and tuning” for better refinement and response. The end result is a hoot as the engine reaches peak torque at 1,800 rpm and stays there until 4,000 rpm. This means there’s a ton of torque on tap from low revs and this allows the CT4-V to move with impressive speed. The dash to 60 mph (96 km/h) takes 4.8 seconds, and the engine always feels ready to go.

The four-cylinder is paired to a new 10-speed automatic transmission that works seamlessly as it delivers fast and smooth shifts. The only downside is the shifter, which takes some getting used to as you press forward for reverse.

The other big news for 2020 is the availability of all-wheel drive on a V-Series model. It’s an $1,100 option and it should increase the CT4-V’s appeal in colder climates, where snow and ice is a fact of life.

As you’d expect, the all-wheel drive system provides plenty of grip and helps to build confidence. It’s also relatively seamless and the front / rear split changes depending on the selected drive mode. However, there are some trade-offs as the all-wheel drive variant eschews magnetic ride control for passive dampers. The summer-only performance tires are also replaced by all-season rubber.

While fuel economy probably isn’t a concern for most buyers, the CT4-V is rated at 20 mpg city, 29 mpg highway and 23 mpg combined. Interestingly, the all-wheel drive system barely has any penalty, only lowering the highway rating to 28 mpg. Those numbers seem pretty reflective of real-world driving as we averaged 22.8 mpg over the course of a week.

Since the CT4-V isn’t a fully-fledged V-Series model, engineers aimed for a comfortable luxury car that’s still track-capable. As a result, they equipped it with a sport-tuned suspension that uses a MacPherson-type setup up front and a five-link independent rear.

This enables the car to ride firm but comfortable. Most bumps are well absorbed and barely noticeable and even on bad roads the ride doesn’t feel harsh or unpleasant.

Despite this, the CT4-V is fun and capable as it shines in corners with flat and responsive handling. It also rewards you the harder you push it, and this makes it a willing partner on twisty back roads. Part of this can be chalked up to car’s rear-wheel drive Alpha platform and nearly perfect 50/50 weight distribution.

The sportiness is also present in the Brembo braking system which has four-piston calipers which grab onto discs measuring 12.6 inches (321 mm) front and 12.4 inches (315 mm) rear. If you’re dead set on taking the car to the track, you can also get optional high-performance brake linings which promise to better cope with heat and resist fading.

In the CT4-V, the driving experience is extensively customizable as there are six different modes dubbed the Tour, Sport, Snow / Ice, Track, My Mode and V-Mode. The latter two are customizable, allowing you to adjust settings such as the engine sound, steering, powertrain, and brake response. Each of these settings has multiple different options and there are four different exhaust settings ranging from stealth to track. The latter makes the car sound good when pushed, but is relatively quiet when you’re taking it easy.

Given this extensive customization, you can set up the car to suit your tastes. In particular, I set My Mode to have a track exhaust, sport steering and tour braking. This seems to suit the car’s personality pretty well, as it balances sport and comfort.

These setting are easily accessed by a button on the center console, and there’s also a dedicated V-Mode button on the steering wheel. That mode offers even more customization and you can go from comfort to track-capable in a flash.

Of course, that’s just for the base model and our all-wheel drive tester had a $52,040 sticker price thanks to an assortment of different packages. Among them was a $1,200 climate package, the aforementioned technology package, and a $1,100 driver assistance package which adds adaptive cruise control, enhanced automatic emergency braking and reverse automatic braking.

If you can do without the looks, the CT4 Premium Luxury is available with a detuned version of the turbocharged 2.7-liter four-cylinder that produces 310 hp (228 kW / 314 PS) and 350 lb-ft (475 Nm) of torque. It starts at $40,990, which is a significant saving, but doesn’t have a limited-slip differential and a sport-tuned suspension with magnetic ride control.

Good, Despite Some Flaws

The CT4-V is a departure from the ATS-V, but it provides a good mix of sportiness and comfort. It’s also relatively affordable and will be followed by a true ATS-V successor to appease the purists.

As a result, it’s everything you’d want in a luxury sports sedan – at least on paper. However, in the real-world the car’s interior is likely to be a serious flaw in the eyes of many. It’s okay, but okay just doesn’t cut in the luxury segment.

If you can get past the interior and your preconceived notions about what a V-Series should be, there’s a great car hiding underneath. We just wish that this greatness was reflected everywhere.