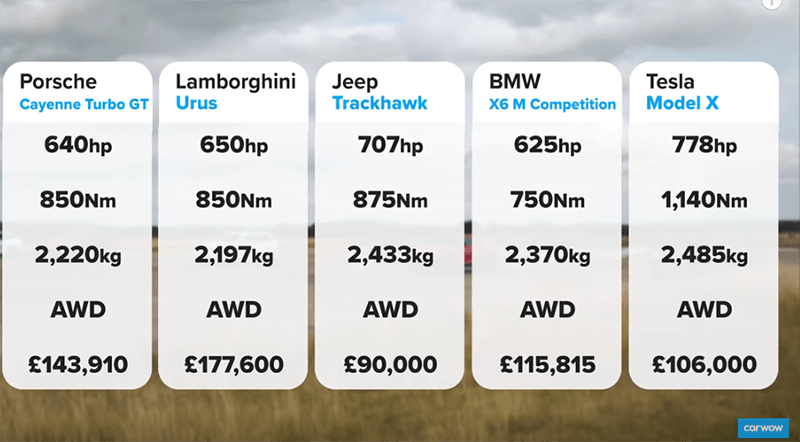 No doubt, each of these is impressive, but the question is, do they all live up to their expectations. Can the Lambo beat the Porsche Turbo and Tesla Model X, being so good on paper? Well, for that, you have to see the drag race. Before you do that, we think you should take a look at the specs of each.

The Urus carries a twin-turbo 4.0-litre V8 engine generating an enormous 641 horsepower (477 Kilowatts) and 850 Nm of torque, mating to an 8-speed automatic transmission and all-wheel-drive system. This power is adequate to take the SUV from 0 to 60 mph in only 3.1 seconds. Lamborghini has used various components from VW Auto Group brands to create this super SUV. It costs £170,000 and weighs 2.2 tones.

Besides the Urus, we have the Porsche Cayenne Turbo GT featuring a twin-turbo 4.0-litre V8 pumping out 631 horsepower (470 Kilowatts) and 850 Nm of torque. Power goes to all wheels via an 8-speed automatic transmission. Remember, this Turbo GT lapped the Nürburgring track quickest in only 7 minutes and 38 seconds. The 2.2 tonnes SUV costs £143,910.

The Jeep Trackhack gets a 6.2L supercharged V8 yielding 707 horsepower and 875 Nm of torque mating to a four-wheel drive and 8-speed automatic transmission. It weighs over 2.4 tonnes and costs around £90,000.

The BMW X6M Competition comes with a 4.4L Twin Turbo V8 delivering 625 hp and 750 Nm of torque pairing with four-wheel drive and an 8-speed automatic gearbox. It weighs just under 2.4 tonnes and costs £115,815.

Finally, the Tesla Model X Long Range Performance boasting two electric motors creates 780 horsepower and a whopping 1,140 Nm of torque thanks to a 100 kWh battery. It weighs just under 2.5 tonnes and costs £106,000.

Here’s a list of the specs and prices for you to compare these machines easily.

So, the question is, which is the quickest by the end of the quarter-mile in the drag race. Well, we do not want to kill your interest by telling you the answer. It is better if you want it yourself here or at the top of the page.