From battery-powered city cars to electric semis, regulations have forced manufacturers to electrify every nook and cranny of the four-wheeled world. Bikes? Well, it’s different in our neck of the woods, where a lack of governmental pressure to meet emissions standards means motorcycle manufacturers can focus their efforts on specific genres. Witness Zero’s genre-defining dirt bikes, Energica’s obsession with superbikes, and Harley-Davidson’s hankering for electron-powered sport cruisers. 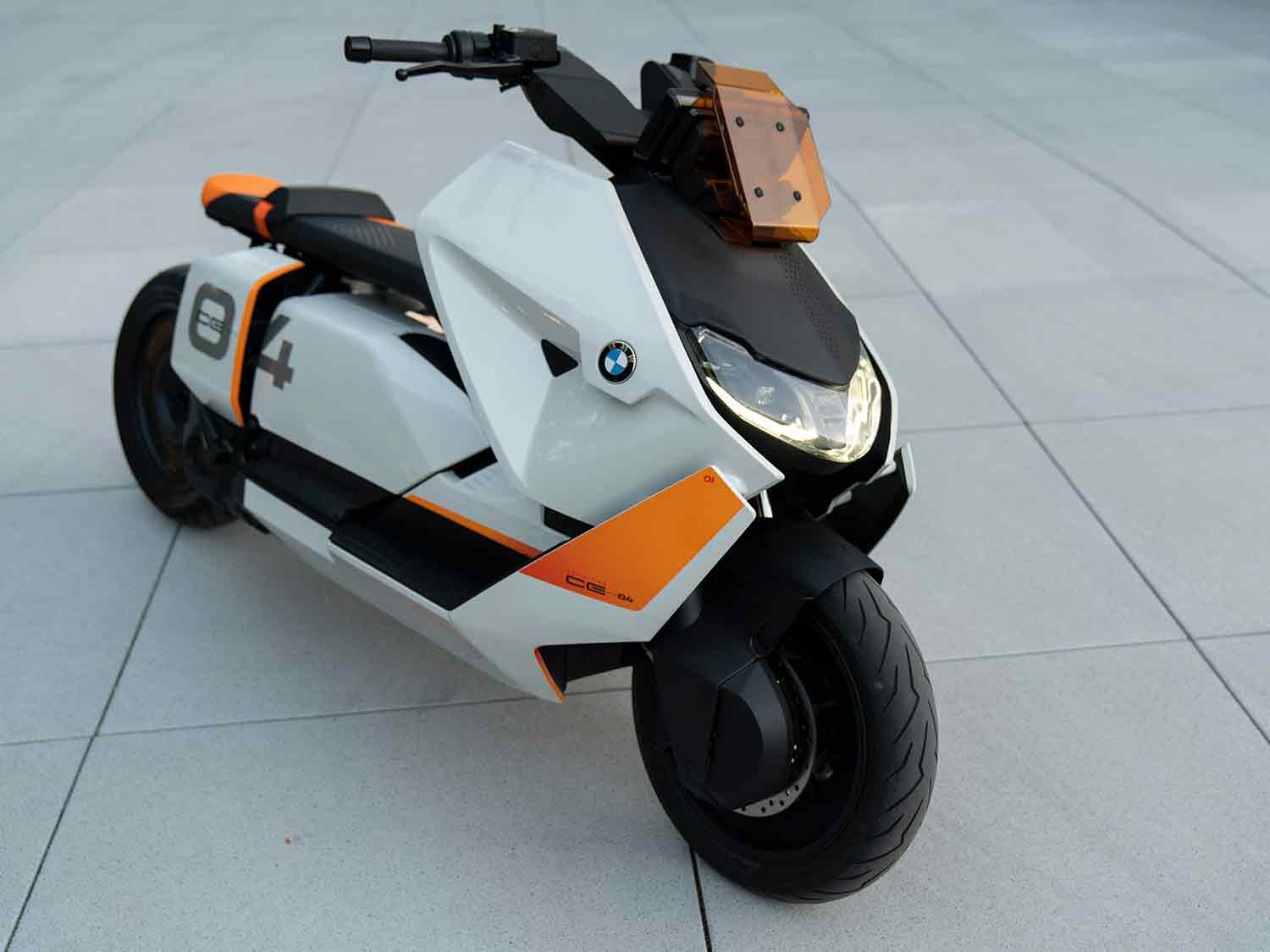 BMW is no different. If the just-unveiled Definition CE 04 concept is any indication, the Bavarian brand appears to be fixed on perfecting the electric scooter genre—at least for the time being. 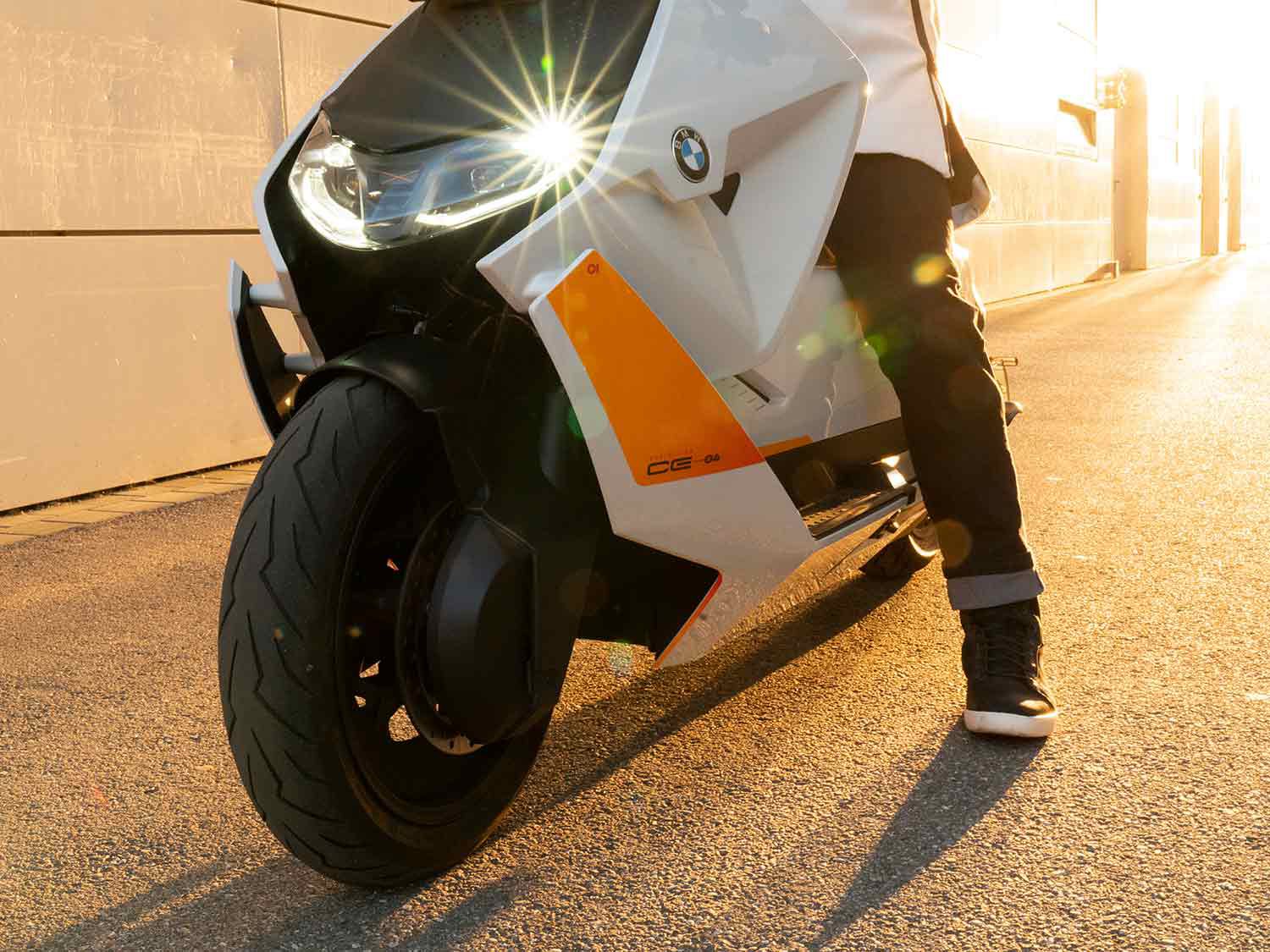 Ergonomics are the name of the game here, with the CE 04 offering easy reach to the pavement and an unfussy relationship between rider and machine. (BMW Motorrad/)

The CE 04 is a teaser to the follow-up for 2014′s C evolution scooter, which was a surprise hit in Paris but whose US sales were limited to California. Debuting as part of BMW’s so-called #NextGen 2020 series of emobility concepts, the CE 04′s nomenclature reveals its positioning: the “C” is short for “city,” a tradition that goes back to oddballs like the C1, BMW’s enclosed scooter (which also happened to become a cult favorite in, you guessed it, Paris); the “E” stands for “electric” (duh); and according to BMW Motorrad CEO Dr. Markus Schramm, the 04 suggests there’s room for future models both above and below this upcoming model. 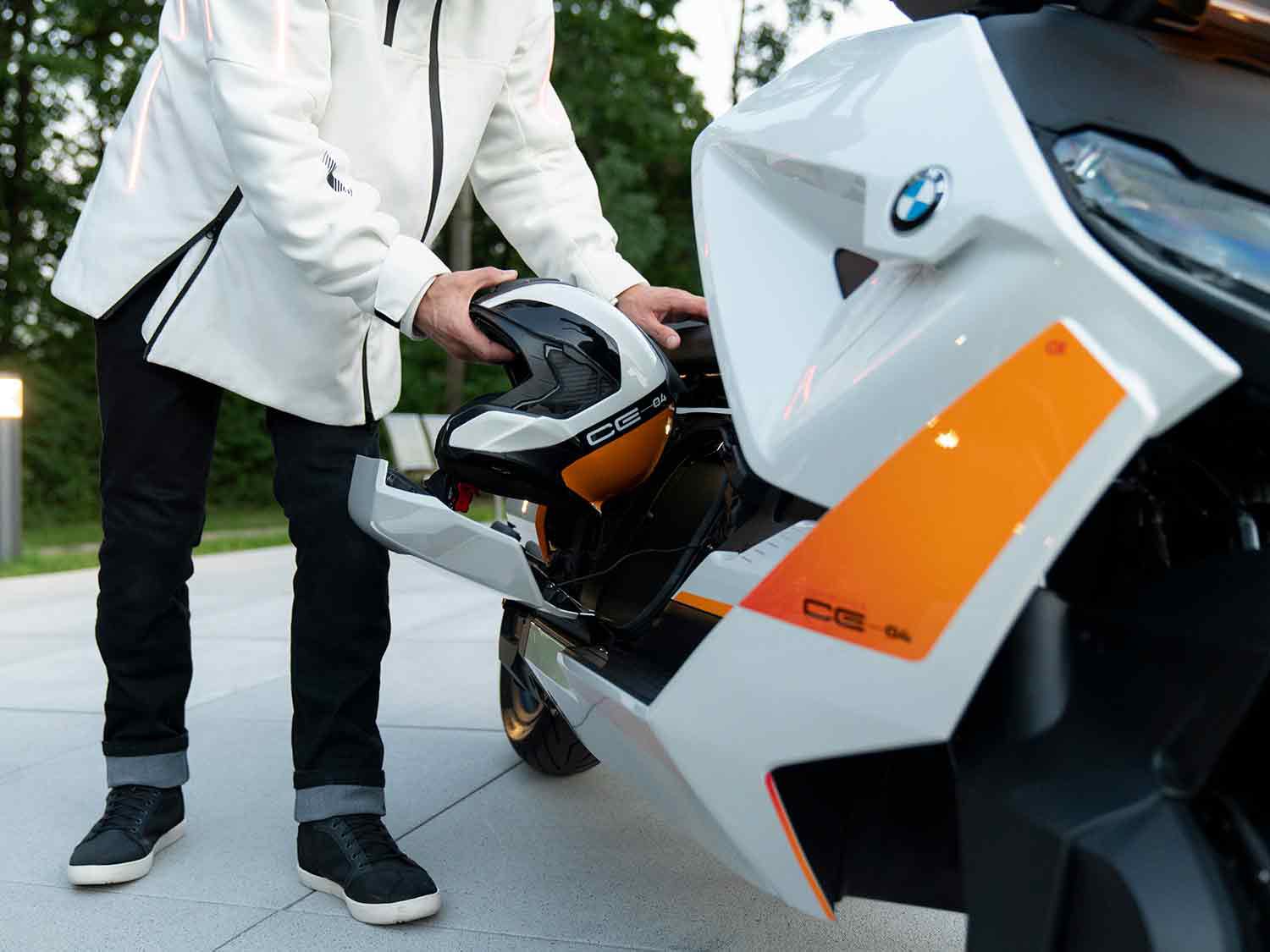 Rather than incorporate a typical hinged saddle, the CE 04’s large storage compartment opens with a folding side door. (BMW Motorrad/)

Technical details on the soon-to-be-revealed electric scooter are sparse, but this latest battery-powered ride appears to be more of an urban lifestyle play than a traditionalist gearhead’s delight. Unlike the bigger, heavier C evolution, whose second-gen model borrowed batteries from the i3 sedan and claimed 99 miles of range, BMW says the upcoming replacement will be lighter while offering only 75 to 80 miles of cruising distance. 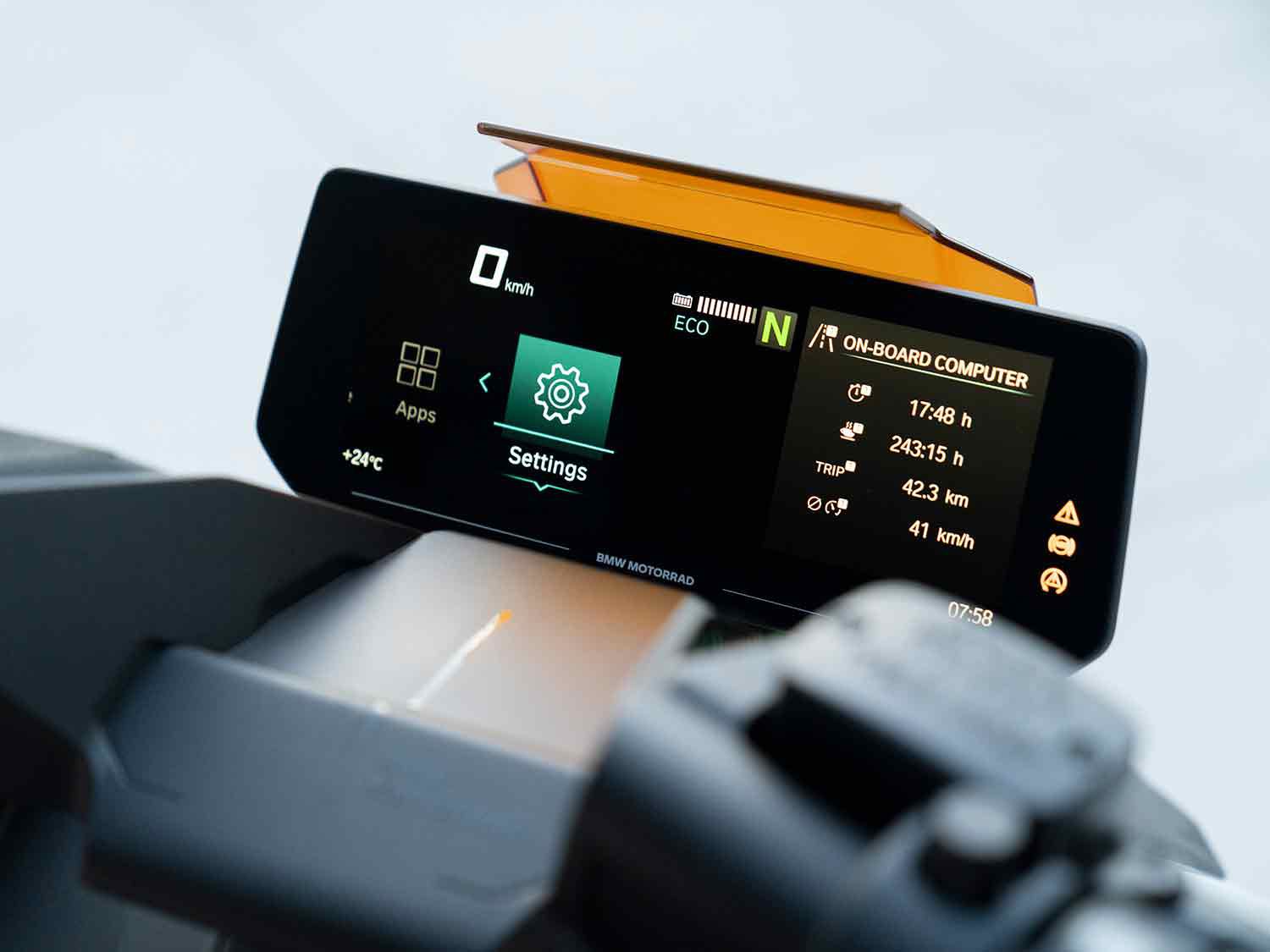 It wouldn’t be the future without a big touchscreen, so here’s a 10.25-inch display developed by Bosch that will reportedly also appear on other 2021 BMW models. (BMW Motorrad/)

Why the reduced range? Don’t we live in the future? According to BMW flack, greater range requires bigger batteries, which add weight and expense to the equation. Motorrad spokespeople are also quick to point-out its sales success in France, but the C evolution’s stateside salability was no doubt hampered by its $14,000 price point. Additionally, BMW says focus groups revealed that urban scooteristi typically ride an average of around 8 miles per day and are thus less interested in long-range comfort than they are in day-to-day practicality and accommodating ergonomics—go figure. 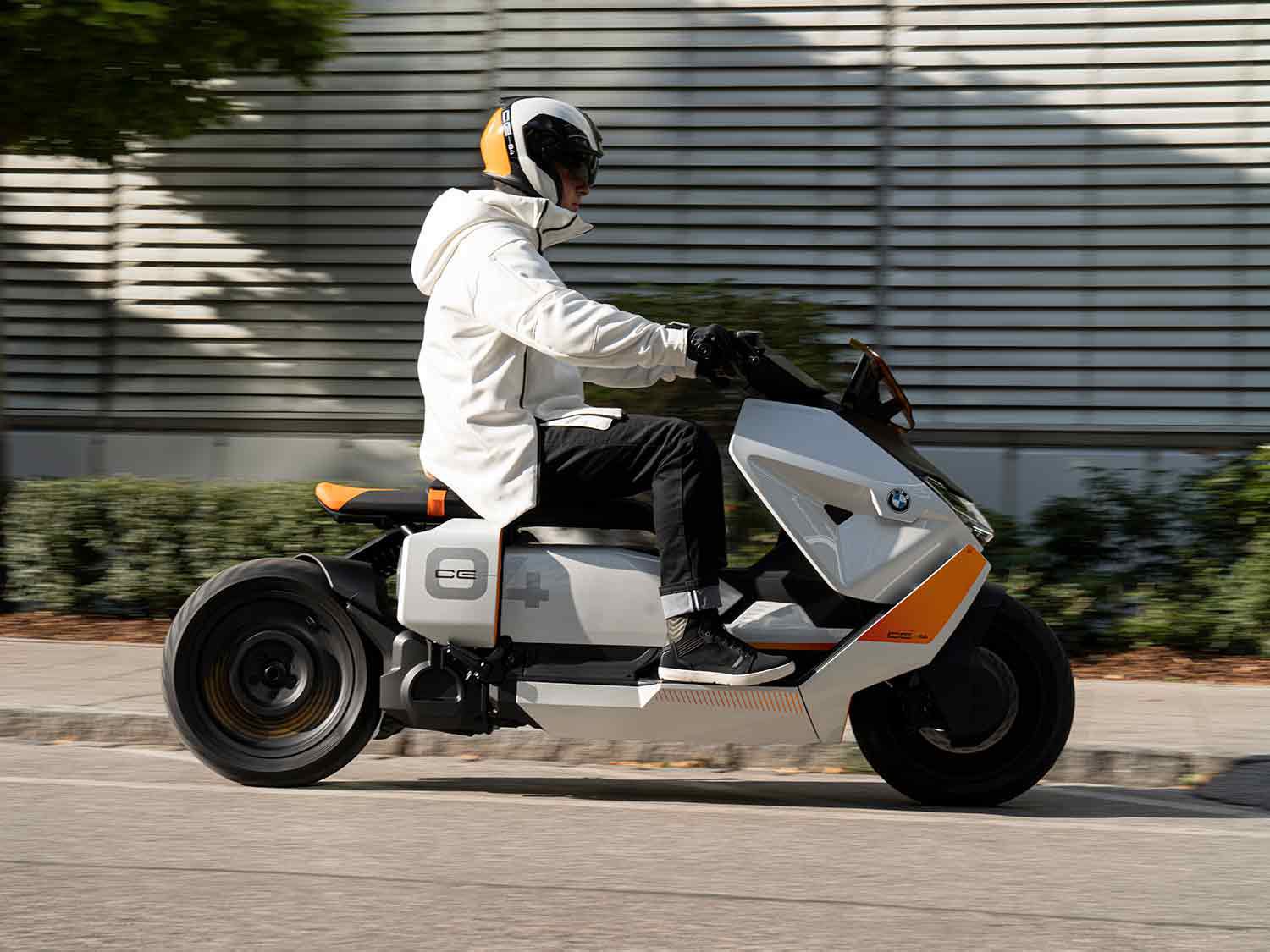 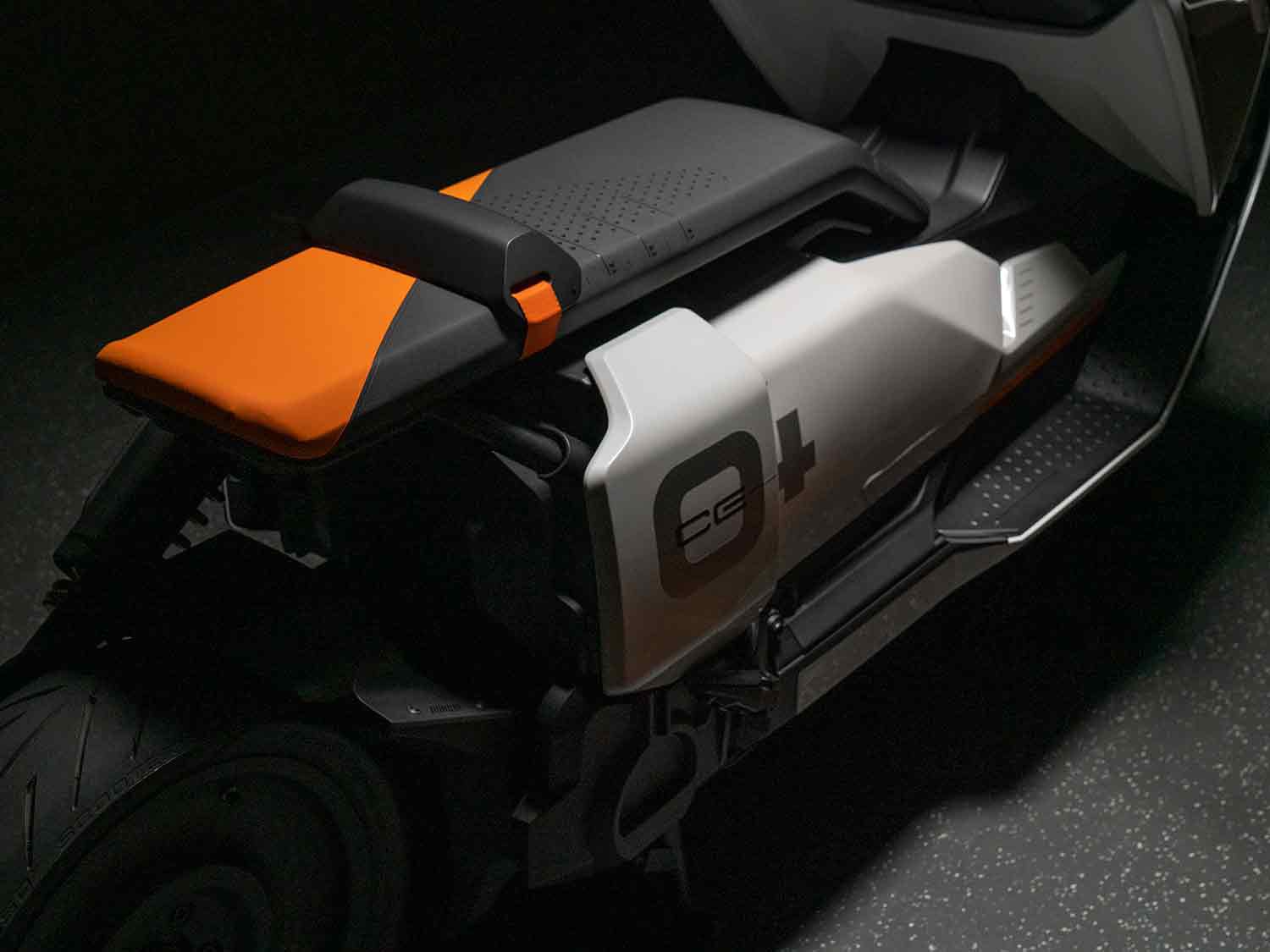 A thin saddle reveals BMW’s goals to make the CE 04 more focused on short rides, rather than long-distance cruises—hence, the estimated 75- to 80-mile range. (BMW Motorrad/)

Freeing the CE 04 from conventional restraints meant being able to break new ground with the shock of the new, a completely modern design untethered from the restraints of the past. The clean-sheet architecture is certain to polarize the love-it-or-leave-it motorcycle set, but it does have a few benefits, including the ability to free up space via a side-opening storage area big enough for a full-size helmet. The modernist design features side panels beneath which the bike’s motor and single-sided swingarm are visible. There’s also future-friendly bits like a massive 10.25-inch display and conceptual accessories like an armored parka jacket with built-in safety lighting strips and pockets equipped with inductive cellphone chargers. As for the place of BMW’s forthcoming escooter in this bright new world of future mobility, global sales and marketing boss Timo Resch says the draw for any two-wheeled conveyance, let alone battery-powered rides, comes from the same motivation as it ever has: “The trend for people to do things for their personal experience, to have adventures, and to tell stories.” But will BMW tackle other electrified moto genres any time soon? Last year’s Vision DC Roadster concept teased a radical vision of a battery-powered sportbike and BMW suggests it’ll be rolling out other battery-powered bike types down the line, but the brand’s near-term appears to be all about the escooter. 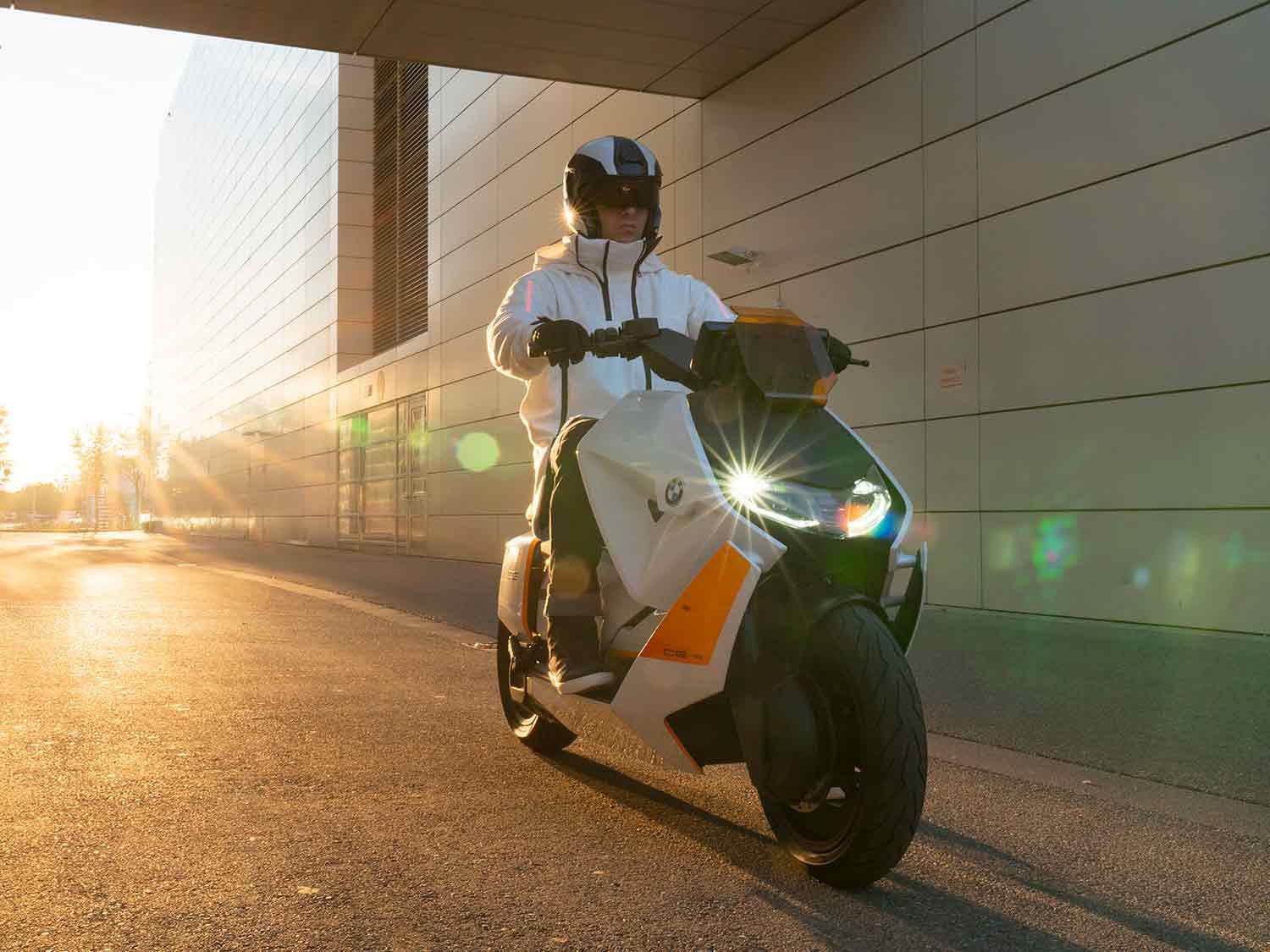 Note the layered fairing, which adds depth to what might otherwise have been flat-looking bodywork. (BMW Motorrad/) 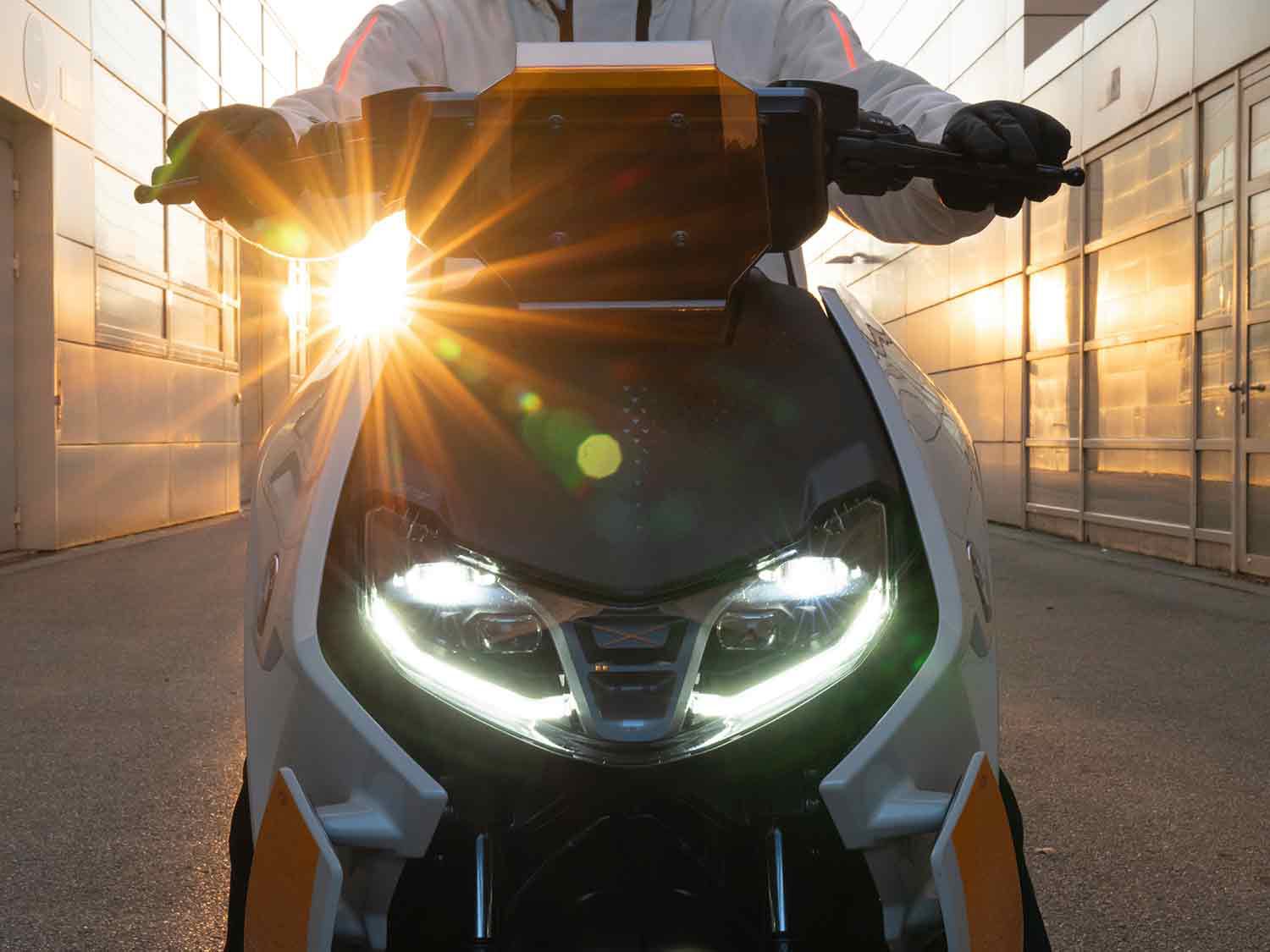 A headlamp close-up suggests more BMW resemblance than other angles on the CE 04. (BMW Motorrad/) 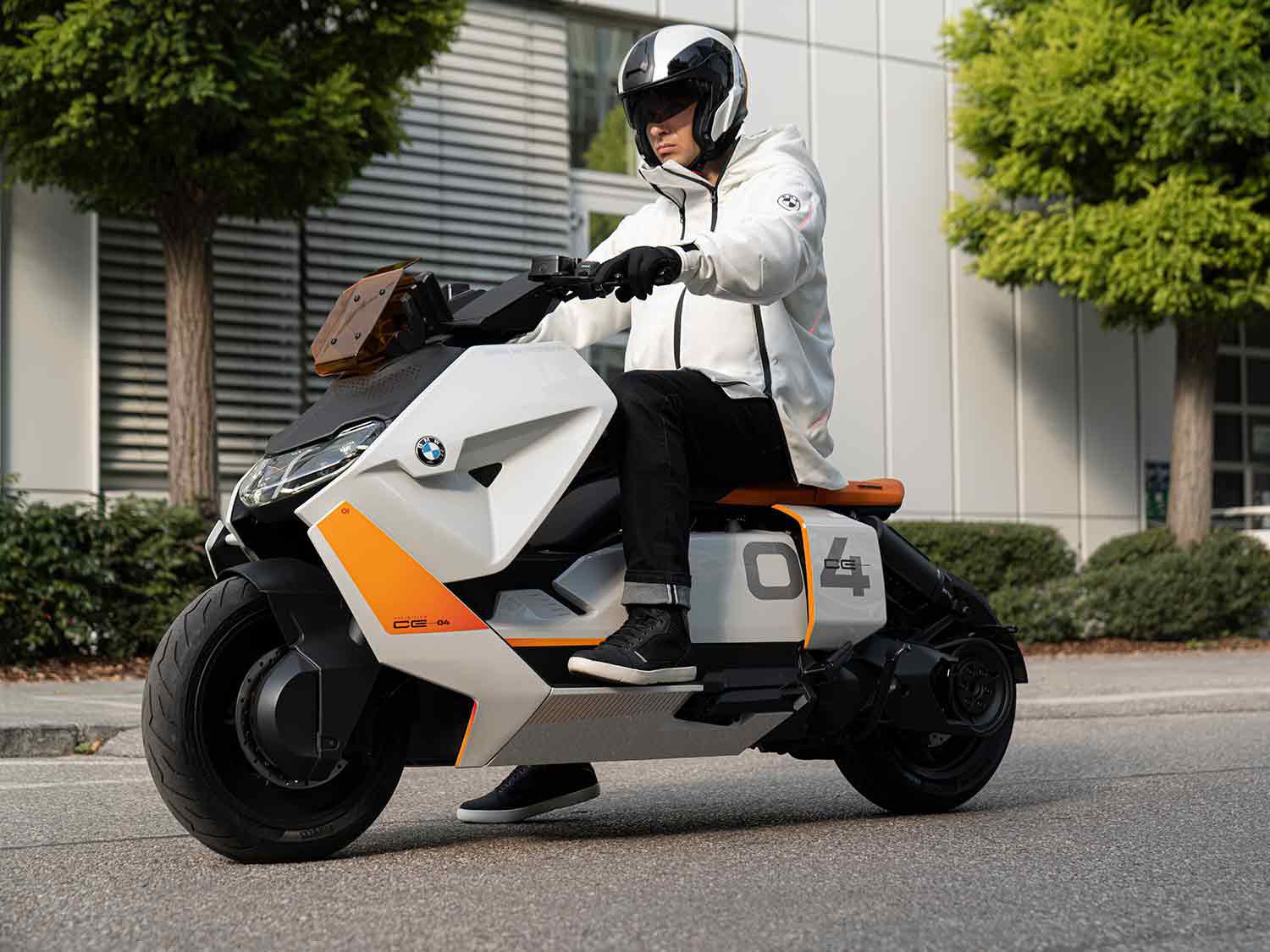 This three-quarter angle shows more of the staggered bodywork, whose angled openings offer peekaboo views of the machine beneath the exterior panels. (BMW Motorrad/) 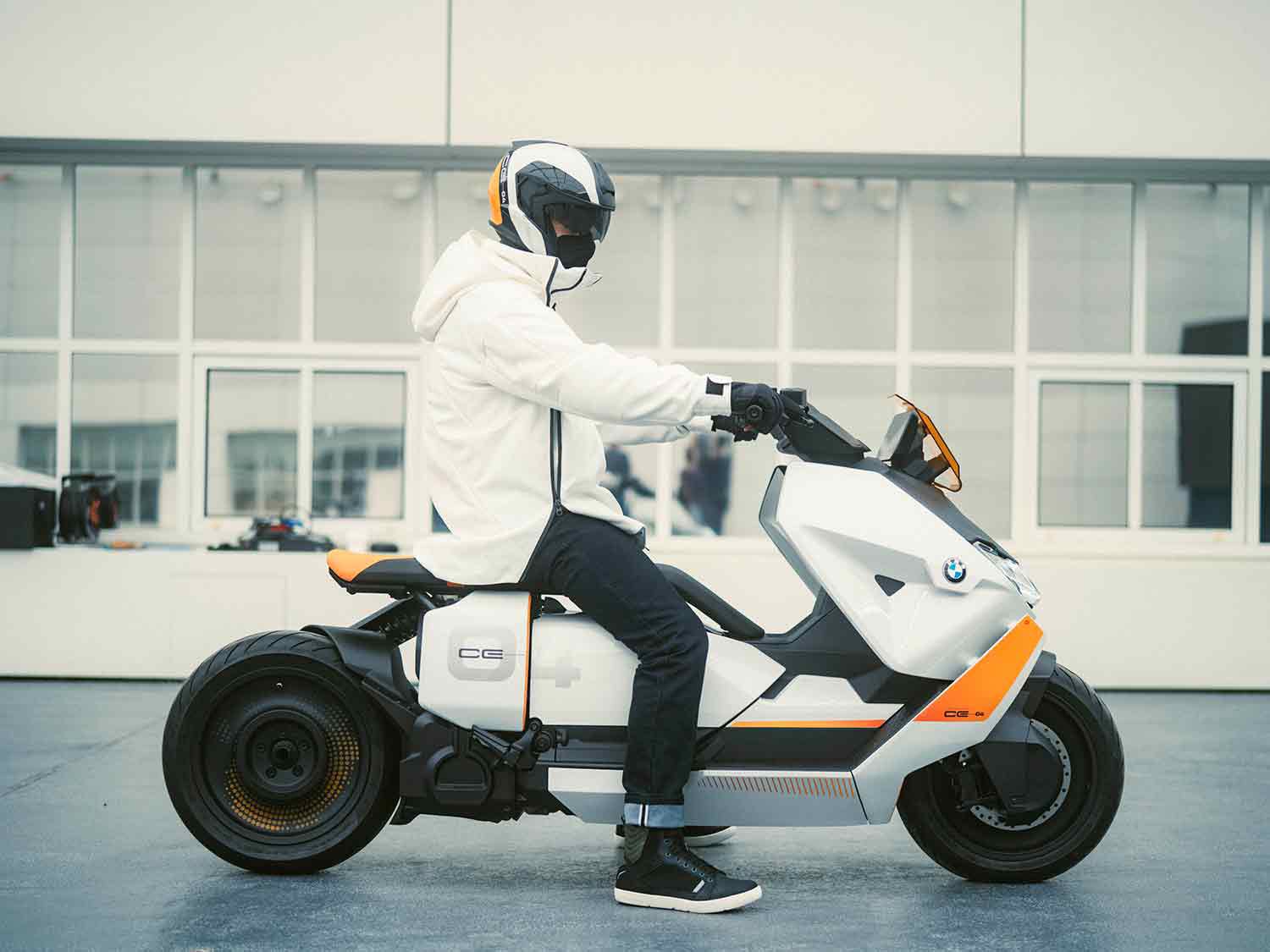 Cool enough for a solo rider, but enough room for a pillion; no word on how a passenger affects the CE 04’s range. (BMW Motorrad/)